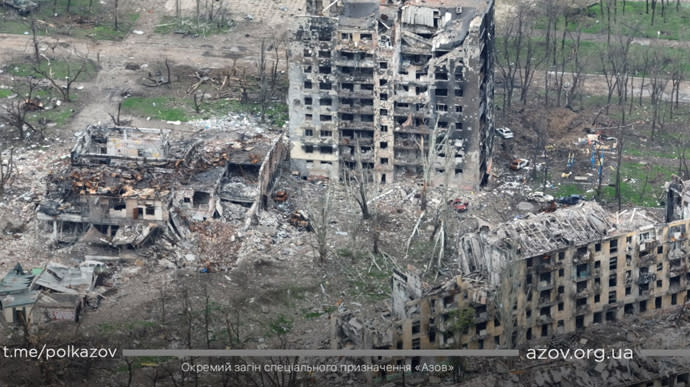 Iryna Balachuk – Thursday, 5 May 2022, 09:13 Russian occupation forces in Mariupol are planning to make the nearly 2,000 Ukrainian men currently held in a so-called “filtration camp” wear Ukrainian military uniforms and participate in a “war prisoners parade” on 9 May. Source: Petro Andriushchenko, Advisor to the Mayor of Mariupol, on the 24/7 national newscast Quote from Andriushchenko: “We have information that almost 2,000 men are currently held in a filtration prison. In the villages of Bezimenne and Kozatske. They were taken from Mariupol almost 4 weeks ago. These men are held there and they are told that they will be made to wear the Ukrainian [military] uniform and to participate in a so-called ‘war prisoners parade’ in Mariupol because they [the Russians] lack current prisoners of war. It will be a grotesque crowd scene for another advertisement image.” Details: Andriushchenko added that Russian preparations for Victory Day [9 May] celebrations in Mariupol are underway. On 4 May, the city was visited by Russian representatives for Mariupol: Deputy Head of Presidential Administration and Secretary General of Edinaya Rossiya [United Russia]. The advisor to the Mayor also said that they have “even installed this scarecrow of a woman with a flag” and that the “preparations for this obscurantism” are ongoing. Russian heavy machinery is working to clear away the rubble in central Mariupol for what Andriushchenko called a “parade on the bones of Mariupol citizens.” A large number of local residents were forced to help clear the rubble in exchange for food.