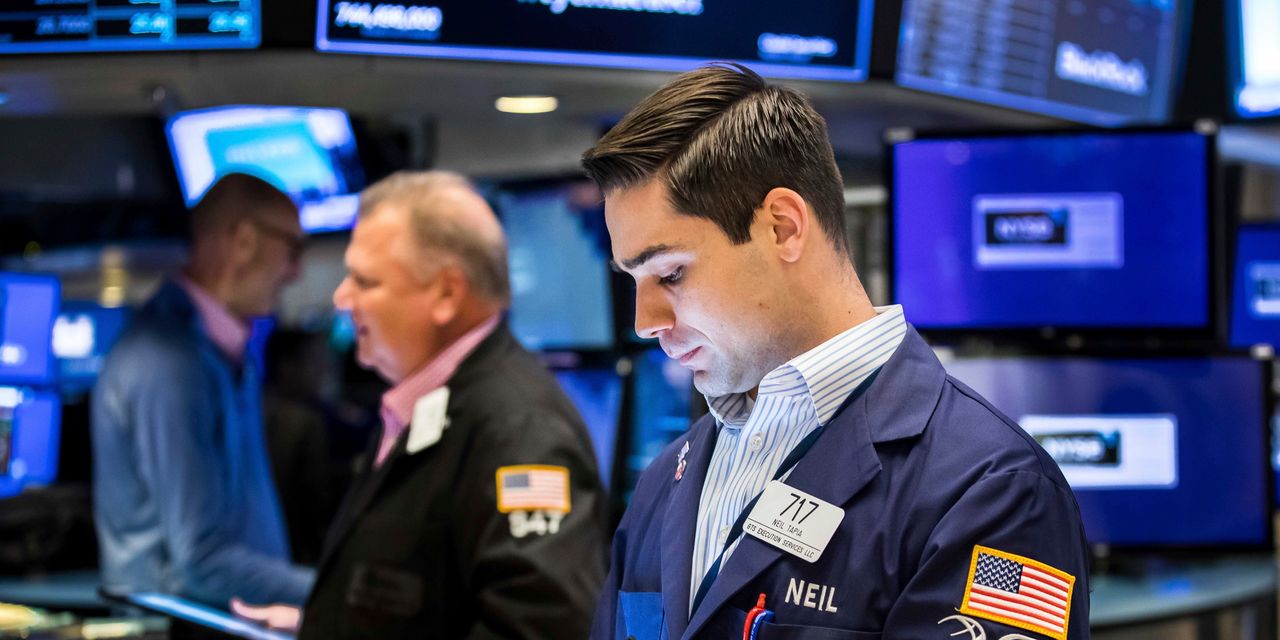 Declines hit across the board, with rising interest-rate expectations increasing worries about the possibility of the economy slipping into a recession. The Dow Jones Industrial Average fell around 2.7%, or about 880 points, in 4 pm trading. Technology shares slid along with banks and consumer shares, sending the S&P 500 down 2.9% and the Nasdaq Composite down 3.5%.

Investors also dumped US Treasurys, driving the yield on the two-year note—which tends to climb with investors’ expectations for interest-rate increases—to its highest level in more than a decade.

The moves came after new data wounded investors’ hopes that easing supply-chain bottlenecks and rising borrowing costs could help precipitate a relatively rapid decline in inflation over the summer without the Fed needing to signal more-aggressive interest-rate increases than already anticipated.

Heading into Friday, various market gauges had indicated investors expected the Fed to raise the target for its benchmark short-term interest rate by half a percentage point next week and in July. After the report, investors priced in another such increase in September, and speculation about a three-quarters of a percentage point increase as soon as next week—a step the Fed hasn’t taken since 1994—was renewed on Wall Street.

“Given the high level of uncertainty with regards to the Fed’s path of interest-rate increases, it’s hard to pound the table and say buy stocks,” said Erik Knutzen, chief investment officer of multiasset strategies at Neuberger Berman.

Though inflation worries have rattled markets all year, the possibility that it could be easing had led to some tentative signs of stability in recent weeks. Any semblance of calm, however, was dashed when the Labor Department said the consumer-price index rose by the fastest year-over-year pace since 1981.

Much of that gain was driven by soaring food and energy costs linked to the war in Ukraine. But even stripping out those volatile categories, so-called core inflation increased by 0.6% from the previous month. That was above the consensus estimate of a 0.5% increase and particularly discouraging for investors given that it showed deep inflation pressures that could outlast temporary supply disruptions.

“Most people thought inflation had peaked a couple of months ago, and now the fact that we’ve actually even gone higher means people have to readjust, including the Fed,” said John Madziyire, senior portfolio manager at Vanguard.

Expectations for higher interest rates were evident in the bond market. In recent trading, the yield on the benchmark two-year note was 3,051%, up from 2,815% Thursday and on pace for its highest close since 2008. Yields rise when bond prices fall.

Adding fuel to Friday’s moves, the University of Michigan reported that an index of consumer sentiment dropped in June to its lowest point since the inception of the survey in the late 1940s. The same survey showed that Americans expect consumer prices to rise 3.3% annually over the next five to 10 years, up from 3% the previous month.

Economists generally believe that consumers’ expectations for inflation can feed into actual inflation. Signs that those expectations are drifting higher could provide officials with an “’out’ from their current 50 [basis point] guidance,” allowing them to raise rates by 0.75 percentage point next week, Jefferies analysts wrote in a note to clients.

Friday’s data hardly meant that US consumers are in bad shape. Despite declining sentiment, consumers have continued to spend at a rapid clip, a major cause of inflation but also a support for corporate earnings. Recent data has also continued to show a tight job market—with the number of openings far outpacing the number of people looking for work—speaking to the strength of the economy but also the lengths to which the Fed might have to go to bring it more into balance.

For investors, the ideal scenario is a so-called soft landing, in which the Fed cools the economy just enough to bring down inflation without causing a painful recession. Before Friday, hopes for that outcome had helped lift stocks from recent lows. Bond yields, after rising all year, had also found a range, reflecting bets that they already accounted for future Fed rate increases.

In one welcome development for investors, the prices of bonds and stocks have often moved in opposite directions recently, with investors feeling more comfortable about turning to Treasurys as a haven when stock prices have declined. In part, Mr. Madziyire said, that has reflected the calculation that lower stock prices themselves could hurt economic growth. That would then reduce the need for central bank officials to push up Treasury yields, which serves as benchmarks for borrowing costs across the economy.

That relationship, however, broke down again on Friday, giving investors few places to hide.

Shares of DocuSign fell 24% after the e-signature software developer said that its growth slowed in the first quarter and that it is scaling back its hiring plans. Stitch Fix dropped 16% after the personal-styling service said it is cutting about 330 jobs as it contends with a slowdown in consumer spending and widening losses.

the maker of Jif peanut butter and Smucker’s jam, was recently up 1.9% and the best-performing stock in the S&P 500. Kellogg,

Campbell Soup and Kroger were up to at least 0.4%.

“It’s not that demand is softening or falling off a cliff; it’s just shifting how consumers are spending their money,” said Tim Chubb, chief investment officer at Girard Advisory Services in Pennsylvania.

Adding pressure to consumers’ wallets: Inflation data suggested prices for energy jumped 34.6% from a year earlier, while the cost of groceries rose 11.9% on the year. Analysts worry that an extended surge in regular goods, such as milk, bread and eggs, could push consumers to adjust their spending habits, further souring economic sentiment.

“We think the market will take a bit more convincingly that peak core prices are behind us and they will fade meaningfully,” said Edward Smith, co-chief investment officer at UK investment firm Rathbone Investment Management.

Shoppers have also shifted their spending from the casual clothes and home items that had been in demand during the height of the pandemic. Some merchants are marking down excess goods, which is worrying investors about margins and consumer strength ahead.

“Those things are really throwing a lot of inventory situations at the retailers,” said Jason Pride, chief investment officer of Private Wealth at Glenmede. His firm has added exposure to short-duration bonds.