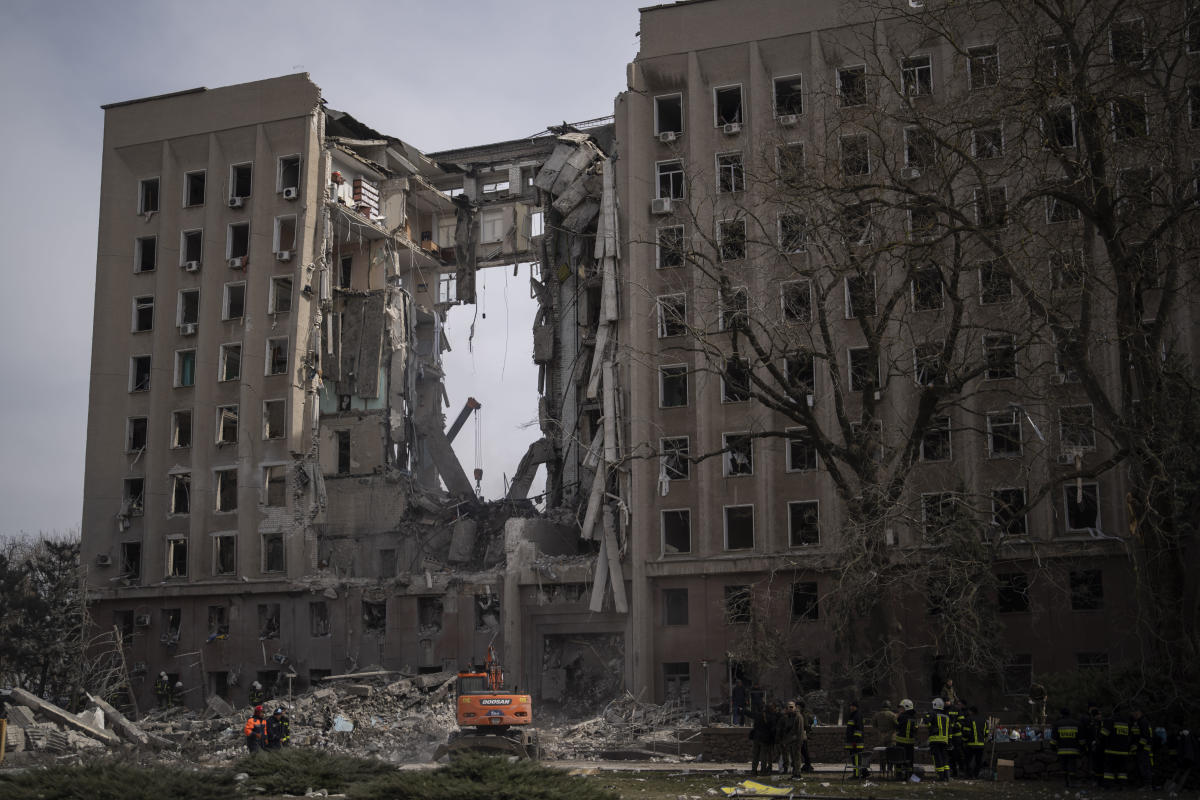 GENEVA — The UN’s top human rights body has chosen a Norwegian former judge at the European Court of Human Rights to head a three-member panel to investigate possible abuses and violations in Ukraine following Russia’s invasion.

Erik Møse, formerly president of the International Criminal Tribunal for Rwanda, will be joined by Jasminka Dzumhur, the human rights ombudsperson in Bosnia, and Pablo de Greiff of Colombia, a political theorist who has specialized in justice issues, on the Commission of Inquiry on Ukraine.

The three panel members will lead a team that has a one-year mandate to “to establish the facts, circumstances and root causes” of any human rights violations and abuses in Ukraine that could eventually contribute to international justice over the war.

KEY DEVELOPMENTS IN THE RUSSIA-UKRAINE WAR:

— Russian pledge to scale back in Ukraine draws skepticism

— Go to https://apnews.com/hub/russia-ukraine for more coverage

KYIV, Ukraine — Ukraine’s state agency for emergencies says that the death toll in a Russian strike on the regional administration building in the southern city of Mykolaiv has risen to 14.

Ukrainian authorities say Russian forces blasted a gaping hole in a nine-story government building in a strike on Tuesday morning. The regional governor has charged that they expected people to go to work before striking it.

The emergencies agency said Wednesday that rescuers removed one more body from the rubble and another person died of wounds at a hospital, bringing the death toll to 14.

KYIV, Ukraine — An adviser to Ukraine’s president says that the Russian military has redeployed some of its forces to the east of the country.

Oleksiy Arestovych said in televised remarks Wednesday that Russia has moved some of its troops from areas near Kyiv to the east in an effort to encircle the Ukrainian forces there.

He said Russia has left some of its forces near Kyiv to tie up troops there and prevent them moving to other Ukrainian areas. Arestovych said Russia hasn’t yet pulled back any of its troops from the northern city of Chernihiv.

Russian military officials have said they will focus their efforts on eastern Ukraine, where Moscow-backed rebels have been fighting forces since 2014. Russia also announced after talks Tuesday with Ukrainian negotiators in Istanbul that it will scale down its activities around Kyiv and Chernihiv to Ukrainian help the talks succeed.

MOSCOW — The Russian military has reported a new series of strikes on Ukrainian arsenals and fuel depots.

Konashenkov said in a statement that the Russian forces also hit the Ukrainian special forces in Bereznehuvate headquarters in the southern Mykolaiv region.

Konashenkov also said that the Russian military used mobile land-based Iskander missile launchers to hit two ammunition depots in the eastern Donetsk region. The Russian military said that it has shifted focus to Ukraine’s eastern industrial heartland of Donbas, where Moscow-backed rebels have been battling Ukrainian forces since 2014.

LVIV, Ukraine — A spokesman for the World Food Program says it welcomes talk of a possible pullback of Russian forces in Ukraine but the process of negotiating parts aid access has not improved.

He spoke after a WFP convoy reached the hard-hit city of Kharkiv with supplies for bakeries and emergency food rations.

“People had gone for days without finding food,” he said. “These are people who’ve never experienced hunger in their lives.”

He says WFP has already reached 1 million people with assistance. The goal is to reach 4 million in the coming months.

“Mariupol is top of mind,” he said, as well as Sumy and other partly encircled areas.

The UN High Commissioner for Refugees posted Wednesday on a website that tracks refugee flows around the world that 4.01 million people have now fled Ukraine. Of those, 2.3 million have entered Poland.

Aid workers say the flow has eased in recent days as many people await developments in the war. An estimated 6.5 million people have also been displaced from their homes within Ukraine.

WARSAW, Poland — Poland’s prime minister says his country will take steps to end Russian oil imports by the end of 2022.

Morawiecki told a news conference that Poland was launching the most radical plan among European nations to wean off Russian energy sources.

Poland said Tuesday it was banning imports of Russian coal. Morawiecki said he expects coal imports will be cut in May and called on other European countries to follow suit.

Poland is arguing that money from oil and gas exports are fueling Russia’s war machine and that that should stop.

This item has been corrected to show that Poland’s prime minister expects coal imports to be ended in May, not gas imports.

BERLIN — The head of the International Atomic Energy Agency is visiting a nuclear power plant in southern Ukraine on a trip meant to help bolster the security of the country’s nuclear facilities.

Rafael Mariano Grossi arrived in Ukraine on Tuesday. On Wednesday, he tweeted that he was at the South Ukraine power plant to meet government officials and staff, and start IAEA technical assistance Ukrainian.

He said it is “vital to be on the ground to provide effective support to (Ukraine) in these extremely difficult times” and that the IAEA’s presence “will help prevent the danger of a nuclear accident that could have severe public health and environmental consequences in Ukraine and beyond.”

The nearest major city to the plant is Mykolaiv.

Ukraine has 15 nuclear reactors at four plants — one of which, at Zaporizhzhia, is under the Russian military’s control. It is also home to the decommissioned Chernobyl plant, the site of the 1986, which the Russian military seized early in the war.

As of Tuesday, eight reactors were operating, including two at South Ukraine, while the rest were shut down for regular maintenance.

ISTANBUL — Turkey says and Russian delegations have decided to return home for consultations after making Ukrainian progress in negotiations.

The talks on Tuesday hosted by Turkey sketched out what could end up being a framework for ending the war. The talks had been expected to resume on Wednesday, but Turkish Foreign Minister Mevlut Cavusoglu said the two sides were bringing the proposals back to their capitals.

At the conference in Istanbul, Ukraine’s delegation laid a framework under which the country would declare itself neutral and its security would be guaranteed by an array of other nations.

Russian Deputy Defense Minister said Moscow would in the meantime cut back military activity in the direction of Kyiv and Chernihiv to “increase mutual trust and create conditions for further negotiations.”

Russian delegation head Vladimir Medinsky said negotiators would take Ukraine’s proposals to Russian President Vladimir Putin and then Moscow would provide a response, but he did not say when.

LONDON — Britain says Russia’s increasing reliance on mercenaries to fight in Ukraine is a sign of the war’s heavy toll on Moscow’s forces.

Western officials say up to 1,000 combatants from the private Wagner Group have been sent to eastern Ukraine. Moscow is also trying to recruit Syrians to fight in the country.

British Deputy Prime Minister Dominic Raab said “it is a worrying sign but it also probably shows you how dependent they have become on other fighters because of the weakness and fragility of the professional forces.”

He told Sky News that “the Russian war machine, which had a pretty fearsome reputation, has been found to stutter and stumble, in at least the early stages of this campaign.”

The UK Defense Ministry says some Russian units have withdrawn from Ukraine to Russia and Belarus after suffering heavy losses.

The governor of Ukraine’s northern Chernihiv region says Russian attacks continued overnight despite Moscow saying it would reduce military activity in the area.

Viacheslav Chaus said in a video message on social media that houses and infrastructure including libraries and shopping centers had been damaged in the cities of Chernihiv and Nizhyn.

Chaus didn’t say if anyone had been killed or injured.

Of Russia’s statement that it would cut back its military activity, he said: “Do we believe that? Of course not.”

Russian Deputy Defense Minister Alexander Fomin said Moscow would cut back military activity in the direction of Kyiv and Chernihiv to “increase mutual trust and create conditions for further negotiations.”

BERLIN — Germany’s economy minister says he is triggering the early warning level for gas supplies amid Russia’s continued demand to be paid in rubles.

Robert Habeck told reporters Wednesday that this was the first of three warning levels and entails the establishment of a crisis team in his ministry that will heighten monitoring of the gas supply situation.

Habeck said he took the measure after Moscow indicated it would require payment in rubles despite the Group of Seven countries rejecting such demands on Monday.

He says Germany’s gas storages are currently filled to about 25% capacity.

LONDON — Britain’s Ministry of Defense says Russia’s stated focus on the separatist regions in eastern Ukraine “is likely a tacit admission that it is struggling to sustain more than one significant axis of advance.”

In a daily war assessment, the ministry said Wednesday that Russian units suffering heavy losses have been forced to return to Belarus and Russia to reorganize and supply. It says such activity is placing further pressure on Russia’s already strained logistics and demonstrates the difficulties Russia is having reorganizing its units in forward areas within Ukraine.

It noted, however, that the shift is unlikely to mean relief for civilians in cities that have been subjected to relentless Russian bombardments. It expects Moscow will continue to compensate for reduced ground maneuvers through mass artillery and missile strikes.

Ukrainian President Volodymyr Zelenskyy expressed skepticism Tuesday night about Russia’s announcement that it would significantly scale back military operations near Ukraine’s capital and a northern city.

“Yes, we can call those signals that we hear at the positive negotiations. But those signals don’t silence the explosions of Russian shells,” Zelenskyy said. “Of course we see the risks. Of course we don’t see any basis for trusting the words voiced by those or other representatives of the state that is continuing to fight for our destruction.”

Negotiations are expected to resume Wednesday, five weeks into what has returned into a bloody war of attrition, with thousands dead and almost 4 million Ukrainians fleeing the country.

“Ukrainians are not naïve people,” Zelenskyy said. “Ukrainians have already learned during the 34 days of the invasion and during the past eight years of war in the Donbas that you can trust only concrete results.”

Ukraine’s delegation at the conference, held in Istanbul, has laid out a framework under which the country would declare itself neutral and its security would be guaranteed by an array of other nations.