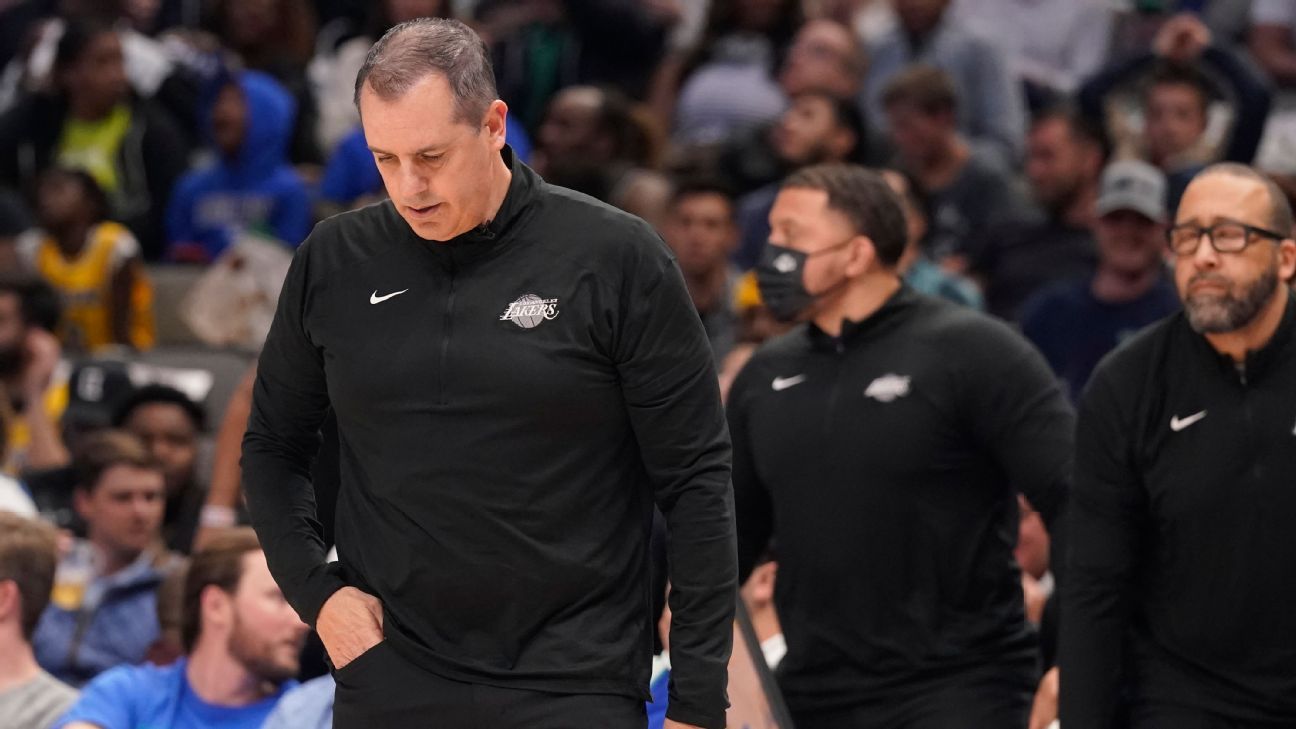 DALLAS — For the first time since the first week of the regular season, the Los Angeles Lakers find themselves on the outside of the play-in tournament looking in after Tuesday night’s 128-110 loss to the Dallas Mavericks.

Playing without LeBron James (left ankle sprain) and Anthony Davis (right midfoot sprain), the Lakers trailed by as many as 37 points, as Luka Doncic recorded a 30-point triple-double through the first three quarters (34 points, 12 rebounds) , 12 assists).

“We just didn’t execute well enough and play with enough toughness, IQ, intelligence, focus and fight,” Lakers coach Frank Vogel said. “So, not acceptable and just a poor performance across the board. Coaches, players, everybody.”

LA is currently No. 11 in the Western Conference with seven games remaining. The Lakers, at 31-44, have the same record as the No. 10 San Antonio Spurs, but the Spurs own the tiebreaker.

Looking ahead to the final stretch, the Lakers have gone 4-10 against their six remaining opponents. (They play the Denver Nuggets twice). The Spurs are 5-11 versus their six remaining foes. (San Antonio plays the Portland Trail Blazers twice). The Nuggets (45-31) are No. 6 in the Western Conference standings. The Blazers (27-48) are No. 12 and will be out their star, Damian Lillard, for the rest of the season.

Vogel said James and Davis will both be reevaluated Thursday to determine their availability for LA’s game at the Utah Jazz on Thursday night. Davis, who has been sidelined since Feb. 16, is targeting a return by Friday at home against the No. 9 New Orleans Pelicans, sources told ESPN.

Tuesday’s performance was about as bad as it has been for the Lakers in a season already full of disappointment. The 82 points they gave up in the first half were the second most allowed in a first half in franchise history, narrowly avoiding the record set when the Boston Celtics hung 83 on them in the first half on Feb. 27, 1959, according to data compiled by ESPN Stats & Information.

LA’s 26-point halftime deficit on Tuesday combined with the 28 points New Orleans outscored them by in the second half on Sunday represented the worst points differential, minus-54, over a two-half span for the Lakers in the shot clock era.

“The standings are the results,” Vogel said when asked if falling out of the play-in ups the Lakers’ urgency. “We have to keep our focus on the process and the work and the things that are going to lead to the next win. That’s the only place that our focus will be.”

Russell Westbrook, who had 25 points, eight rebounds and six assists but was part of LA being outscored by 25 points in the 32 minutes he was on the floor, added another contentious postgame exchange with a reporter to his season résumé.

When Westbrook was asked what changes for LA now that it has to fight to get back into the play-in tournament, he replied, “Nothing, man. Nothing.”

After the reporter followed by asking why nothing has changed, Westbrook got up from his seat at the interview table and said, “What do you think should change?”

As the exchange continued for a few more moments, Westbrook noticed a video camera pointed in his direction and changed his tone, offering a half-hug to the reporter, before leaving the room.

The Lakers are now 4-13 since the All-Star break, which is on pace to be the franchise’s second-lowest win percentage post All-Star break in team history.

“We just got our butt whupped. Straight up,” Lakers forward Stanley Johnson said. “So, whatever spirit or whatever, they kicked our ass. It was 30 points pretty much the whole game. I don’t know how else you want to put it. We got to be a lot better than that.”