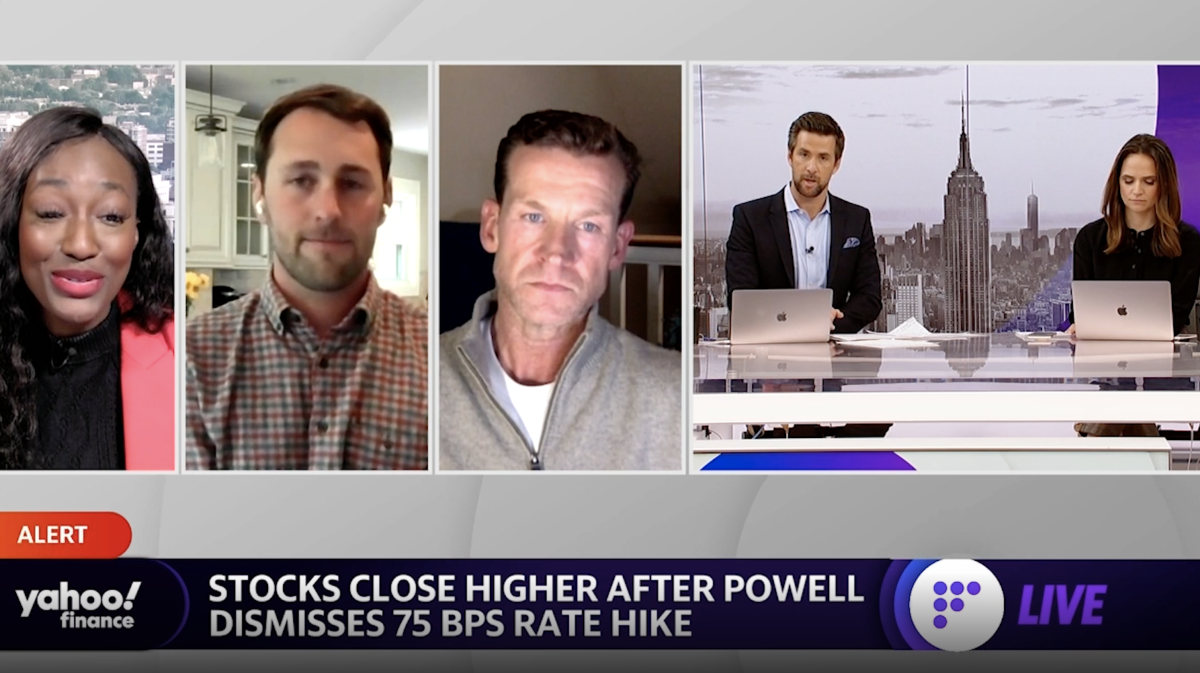 – Here’s the closing bell for today, Wednesday, May 4, at the New York Stock Exchange.

DAVE BRIGGS: Plenty of reason to applaud the market action today. That is your closing bell. And here are the applause-worthy numbers. Wow, look at it, just about 3% for the Dow, 3% for the S&P, and over 3% gains for the NASDAQ. A lot of green on the board after the comments from Fed Chair Jerome Powell.

Let’s bring on our panel to talk about it, David Wagner Aptus Capital Advisors portfolio manager and Hugh Roberts Quant Insight head of analytics. Gentlemen, good to have you. David, what are the markets rallying on? It did look like, right about the time the Fed Chair ruled out a 75-point hike, they spiked. Is that it in your estimation?

DAVID WAGNER: Absolutely, that was it. I think we definitely got more of a dovish tone from Jerome Powell today, really on two things. I think the Fed was expecting more tightening over the next three months. Obviously, we’re getting substantially less. And the big thing that Jerome hit on, they dismissed the fact that there could be a 75-point rate here in the near future, but that the committee is not talking about it at all.

And taking it a step further, Fed Chair Jim Bullyard, he actually didn’t even vote for 75 basis points. So he’s been blowing smoke for quite some time now, it feels like, after this full day. But he voted for 50 basis points. So obviously more of a dovish tone really driving the markets higher right now.

RACHELLE AKUFFO: So then, David, what happens next? We’ve got this 50 basis-point hike. What are the markets going to be looking at signal-wise as to how to position themselves?

DAVID WAGNER: So we’ve been, here at Aptus kind of looking back at historical standards during tightening periods to see, hey, what sectors of the market have actually done well in this type of environment? Obviously, not a whole lot of environments that we can really go back to as we transition from a QE period to a QT period.

But if you look back in 2018-2019 when we let a lot of stuff rolled off the balance sheet, or the Fed part, I mean, did, we actually had sectors to really start to outperform. So we had the staples, the health care, and the utilities areas of the market outperform. On the other hand, we actually had energy and materials really underperform.

So I’m kind of tossing that out the window, actually, right now, because I’m actually very bullish on materials and even more bullish on energy moving forward. So if we go back to later periods in the early 2000s and other periods where we actually saw rising rates, so the Fed tightening, you still saw defensive outperformance.

SEANA SMITH: Hugh, let’s get you into the conversation, because clearly, investors, more broadly speaking, seem to be pretty excited about what we heard from Fed Chair Jerome Powell today. But what did you think? Is the Fed making the right move by raising rates by 50 basis points today?

HUGH ROBERTS: Well, I would echo most of David’s comments. I think it has to be the removal of 75 basis points as the catalyst for intraday price action. You can also see that in the sector breakdown you guys just showed with, obviously, tech leading the way. Obviously, that’s normally perceived to be at rates play. So that kind of dovetails with that once again.

To answer your question more directly, I fear that this might just be a bear market squeeze, that the one constant from Chair Powell has been the need to tighten financial conditions. And what we’re seeing today is flying in the face of that.

So you could argue that we’ve got a paradox here, that the more we get a risk-on reaction in the short term, the more rate hikes we take off the table, looking at red euro-dollars for example, the more I fear that this will turn around and bite us again.

DAVE BRIGGS: Interesting David, I want to get your reaction to what Hugh just said.

DAVID WAGNER: I think Hugh’s spot-on right now. I think this is a bear market rally here. I mean, just two days ago, we had the VIX trading at about 36-37. That’s walled down closer to 27 right now. And historically speaking, when you get that VIX coming down a little bit, hey, you’re looking for the potential for some type of squeeze up in my opinion. So I fully agree with you here.

RACHELLE AKUFFO: So Hugh, for people who are looking for an opportunity to get into the market at this point, especially retail investors after all this volatility that they’ve seen, what would you advise them?

HUGH ROBERTS: Well, annoyingly, I thought we had a contrarian call. But David’s just stolen my thunder, because we actually have energy, interestingly. So Quant Insight is predominantly about macro factors. We’re not a bottom-up shop. So we’re looking at economic fundamentals, measures of growth, measures of inflation expectations, financial conditions, risk appetite.

And our quantitative macro models at the moment show that energy has actually, somewhat bizarrely, become a little bit more of a defensive play. It’s actually one of the few sectors that’s comfortable with wider credit spreads. Credit spreads really, on our modeling, are ground zero. If we see another risk-off episode that pushes high-yield spreads in particular catalyst wider, then that really is the that would be there.

So we’re really kind of watching that, both for directional at the index level, but also there for the best kind of sector plays. And interestingly, it’s counterintuitive, but the mathematical relationship at the moment shows wider credit spreads is actually of benefit to XLE.

So I have to agree with David and go with XLE as one of our picks. And David, let’s talk a little bit more about energy, because like he was just saying, it could be called a contrarian play. I don’t think a lot of people are going after this sector right now. But when you’re trying to decide which investments make the most sense right now, what are you looking for?

DAVID WAGNER: Yeah, it’s kind of funny. So I’m a bottoms-up guy. Hugh just said he’s a top-down guy. And are the bottoms-up guy and a top-down guy really coming together with an energy play right here? I love it right now. I mean, it’s been such an unloved space for quite some time.

And what we’ve been saying about energy is it might be a little bit overbought right now, but it’s fully under-owned. If you look back over the last, say, 40 years, the average weight in the S&P 500 for the energy sector is closer to 11%. Yes, this year, the S&P 500’s energy sector has doubled in weight from 2 to 4, but it has a long way to go. I mean, they’re having a full new entrance of potential investors right now, especially on the generalist side.

The energy companies are coming out and saying, hey, we’re not putting in 125% of free cash flow back into the ground. We’re actually going to pay out 75% or 50% of the previous quarter’s free cash flow to investors through share buybacks, through dividends. So they have really changed their mindset that, hey, it’s not growth at any cost. We’re going to be diligent from a capital allocation plan moving forward. So we love energy. I’m right there with you, Hugh.

DAVE BRIGGS: You guys are agreeing way too much today. All right–

DAVE BRIGGS: Hugh, I want to get back to– and maybe you guys can here– to what the Fed chair was saying about a soft-ish landing. And Powell said they have a good chance to have a soft-ish landing. Our earlier guest Michael Cox, former chief economist at the Dallas Fed, said he wants to see less admiration of Paul Volcker and more emulation. Can we avoid a recession? Should he emulate Paul Volcker more?

HUGH ROBERTS: Well, that’s the million dollar question, isn’t it? I mean, for every talking head that points one way, you’re going to get someone else who gives you a different opinion. I mean, history suggests that it’s a very, very big ask.

1994, really, is the most recent time they successfully engineered a soft landing. And I would almost argue there were easier circumstances than the current Fed face, given all the different crosswinds between armed conflict in Russia-Ukraine, lockdown, supply bottlenecks. I mean, it’s just there’s a myriad of different factors moving.

We would argue with my sales hat on that there’s almost too much information for the human brain to parallel process. You need a little bit of mental quantum. You need a little bit of hard maths to help you along the way. And what our models are showing at the moment, if we want to focus on the S&P 500– but it’s equally applicable to Russell or NASDAQ– is that macro-warranted fair value, ie where US equity indices should be, given economic fundamentals and financial conditions and the like, have been falling steadily.

They had, funnily enough, showed signs of a temporary bottom. Just last night, we started to level out a little bit. And the good news is on our models on valuation terms, the markets have priced in some bad news already. They are a little bit cheap. So again, bear market squeeze makes sense to our mind.

RACHELLE AKUFFO: Appreciate your insights on those signals to watch there, gentlemen. David Wagner, Aptus Capital Advisors portfolio manager, and Hugh Roberts, Quant Insights, head of analytics, thank you so much.