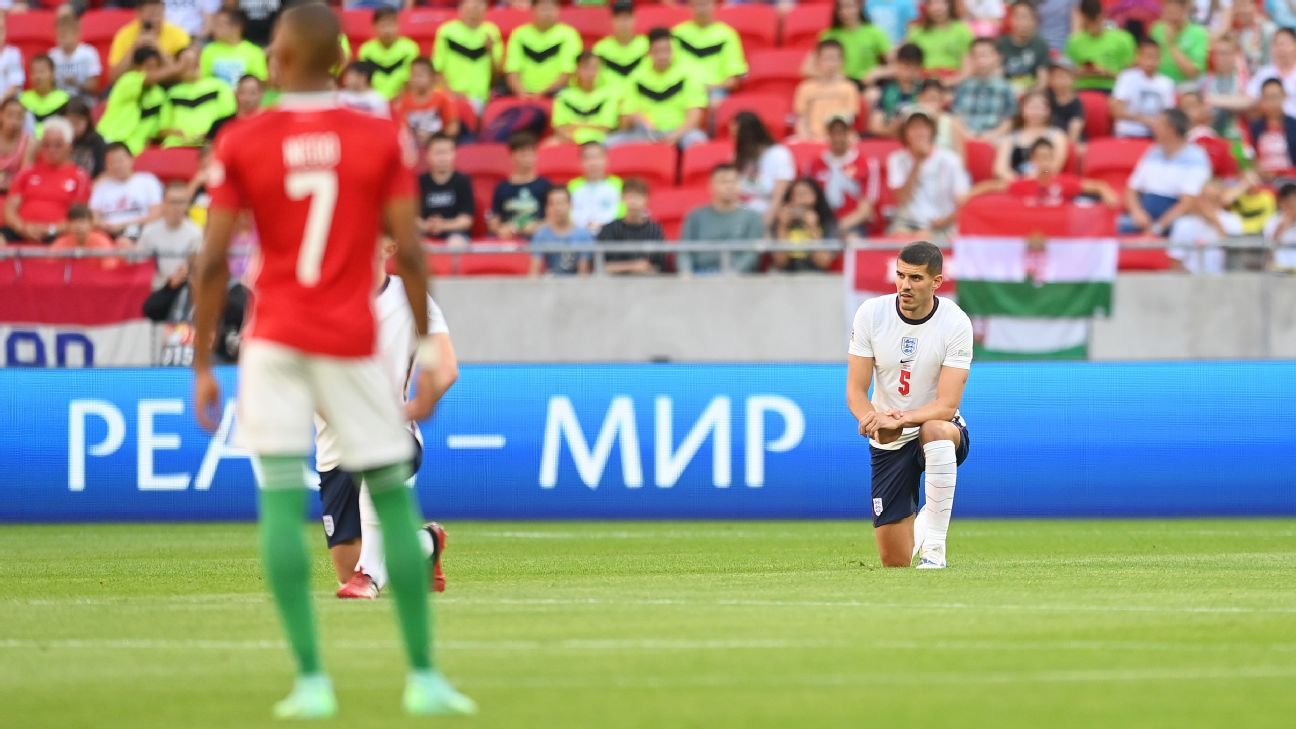 England were booed as they took a knee before kick-off in Saturday’s Nations League game against Hungary — by a stadium predominantly filled with children.

The fixture in Budapest was technically a “behind closed doors” match following UEFA sanctions issued after anti-gay and racist chanting by Hungary fans during their three Euro 2020 group stage matches.

However, article 73 of UEFA’s disciplinary regulations states that certain exceptions can be made, including “children up to the age of 14 (duly accompanied) from schools and/or football academies.”

With one adult accompanying every 10 children, there was estimated to be 35,000 people inside the Puskas Arena, many of whom jeered England’s players as they made their now customary anti-discrimination gesture before the start of the game.

“Very surprised,” England manager Gareth Southgate said when asked about the reaction following Hungary’s 1-0 win. “That’s why we do it. We try to educate. Young people can only be influenced by older people so I think it is one of those today on a day like when we haven’t played well enough and haven’t won the game, it is probably better for me to accept the criticism that comes with that.”

Part of UEFA’s punishment — which was reduced from a three-game ban on appeal to two matches with one suspended for a period of two years and a €100,000 fine — was to display anti-racism messaging inside the ground.

A UEFA “Respect” banner with the hashtag Equal Game was shown above a message in Hungarian — “A gyulolet nem palya” which can be translated as “racism is not a field of play” — and a secondary hashtag, #csakegyutt, meaning #onlytogether.

In the matchday programme, President of the Hungarian Football Federation, Dr Csanyi Sandor, wrote: “UEFA has decreed this fixture must be played behind closed doors due to supporter misbehaviour, the lesson being that international organizations do not tolerate even the slightest manifestation of racism and hatred.

“We will do everything we can so that our passionate support remains but that all unsportsmanlike behavior disappears from stadia so that in the future we will be able to hold every important match in front of capacity crowds without restrictions.”

Speaking before the game on Friday, Southgate admitted he was “surprised” at the number of fans expected to attend a behind closed doors game, adding: “The key is education. The young people in the stadium hopefully pick that message up tomorrow.”

However, boos and jeers were clearly audible when players took the knee while vuvuzelas provided ceaseless noise in a game which reached half-time at 0-0.

England are also inviting schoolchildren to next weekend’s Nations League home game against Italy at Molineux, a punishment arising from the crowd trouble caused prior to last summer’s Euro 2020 final between the two countries, but the Football Association is understood to only have asked between 2,000 and 3,000 supporters.

England were handed a two-game stadium ban, with one match suspended for two years, and ordered to pay a £84,560 fine after ticketless fans fought security staff and police.

Separately, Hungary were given a two-match stadium ban, with one game suspended for two years, and a 200,000 Swiss francs fan by FIFA for racist chanting during England’s last visit to Budapest — September’s World Cup qualifier which ended in a 4-0 win for Southgate’s side.