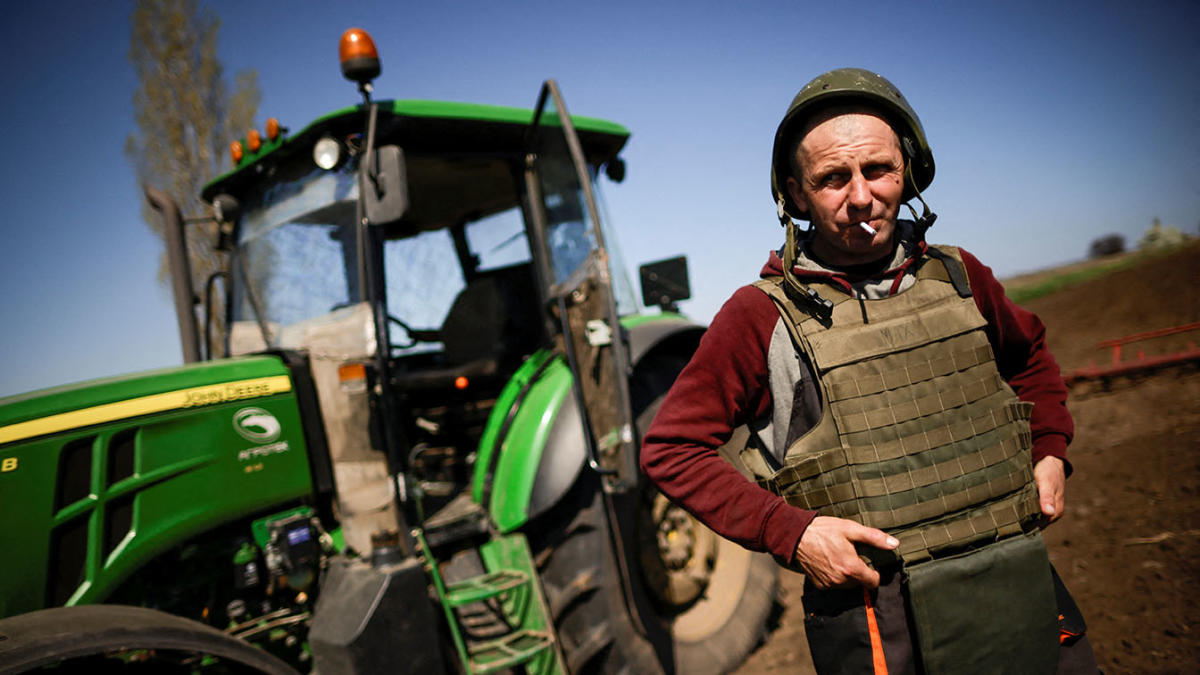 LONDON — Russia’s invasion of Ukraine has caused a ripple effect across the world, worsening the global food crisis. Since Feb. 24, the war has caused a disturbance to the world’s supply chains by driving up the cost of fuel and creating a scarcity of grains and fertilizer. “2022 is likely to be the worst year from a food crisis and global hunger and starvation perspective,” Dr. Rajiv Shah, president of the Rockefeller Foundation, said in April. “More so than any year since World War II.”

Even before the conflict in Ukraine, energy and food prices had increased at the beginning of 2021. This, explains David Laborde, a senior research fellow at the International Food Policy Research Institute, was due to three reasons: higher demand in places such as China that put pressure on world markets, low production of crops at the beginning of 2021, and the disruption to supply chains due to the pandemic.

‘Breadbasket of the world’

Millions of people around the world rely on the farmlands in the Black Sea region. Nearly 30% of the world’s wheat comes from the fertile fields of Ukraine and Russia, while 75 of the essential oils used in cooking and preparing food are also produced there. Together, Russia and Ukraine account for 20% of the world’s exports of mineral fertilizer and natural gas — both components used in the production and cultivation of grains and seeds.

Exports of wheat travel across the globe to countries in the Middle East, Africa and Southeast Asia. Ukraine alone is the fifth-largest exporter of wheat in the world, having felt $1.22 billion worth of wheat to Egypt, $544 million worth to Indonesia and $496 million worth to Pakistan in 2020. In Egypt, millions of people rely on government-subsidized bread that is made from Ukrainian grain. Meanwhile, in Indonesia, the head of the country’s trade ministry’s research division said that the rise in the price of noodles (which contain wheat) would hurt lower-income people.

Russia and Ukraine representing just over 2% of the world’s gross domestic product, the conflict between the two counties has resulted in “sizeable economic and financial shocks,” according to a March report from the OECD (Organization for Economic Cooperation and Development). “A complete cessation” of Russia’s and Ukraine’s wheat exports “would result in serious shortages in many emerging-market and developing economies,” the OECD report added.

The secretary-general’s words were echoed on MSNBC when Shah said the reality of the war would mean that regions like the Horn of Africa and parts of Latin America were going to see lower production years at a time when food prices are sky-high. “It’s going to lead to a tremendous shortage of food for vulnerable families in particular,” he said.

Speaking on the “GZero World” podcast, Ertharin Cousin, the former executive director of the UN World Food Program, said that a “perfect storm” had been created to form the latest crisis. Speaking specifically about the shortage of fertilizer in the world, she said: “The fertilizer challenge began even before the start of this year where the International Fertilizer Association approximately was suggesting that there would be a 30% reduction in the amount of fertilizer that was available in sub-Saharan Africa in particular and that 30% could affect the access to food for about 100 million people.” She added: “With all of those factors and the Russian invasion — that’s the perfect storm.”

Planting crops is a seasonal job, so if the planting season is missed, the consequences are felt months later. The conflict has not only destroyed the land where the grains and seeds are planted — southern Ukraine is mainly made up of farmlands — but the majority of people who would have worked on the farms have either as refugees to neighboring countries or are fighting in the war.

Additionally, around 40% of the world’s exports of potash — a crop nutrient that is rich in potassium and used as fertilizer — typically comes from Russia and Belarus. Russia also exported roughly 48% of the globe’s ammonium nitrate and 11% of the world’s urea. Due to sanctions, as well as the availability of the products, the price of the now scarce fertilizer has risen, in turn driving up the costs of food.

Speaking to Yahoo News, Rose Caldwell, the CEO of the nonprofit Plan International UK, said that the “loss of life on a devastating scale is now a real risk” because of the war. “At least 45 million children are suffering from wasting, which is the most visible and severe form of malnutrition, and potentially life-threatening,” she said. “That’s almost equivalent to the entire population of Spain.”

As the war continues, it means that fields won’t be prepared, crops won’t be planted and fertilizers won’t be available. Caldwell explained that the prices of fertilizer and food will impact countries in West Africa. “The conflict has sent food and fertilizer prices skyrocketing around the world, which is having a devastating impact on countries like Burkina Faso, Mali and Niger, which are already struggling with a hunger crisis,” she said.

“In addition, the Horn of Africa is experiencing one of its most severe droughts in a decade: Meaning 5.5 million children are about to be acutely malnourished, including 1.6 million severely, across Ethiopia, Kenya and Somalia,” Caldwell added. “The coming months will be critical for millions of children across the region.”

In April, the International Monetary Fund (IMF) warned that the potential food shortages could lead to social unrest in the world’s poorest countries. “Increases in food and fuel prices may also significantly increase the prospect of social unrest in poorer countries,” Pierre-Olivier Gourinchas, director of the research department for the IMF, said. More than 40% of caloric intake in countries such as Botswana, Lesotho and Mauritius comes from imported rice, corn and wheat. Food insecurity in African countries has caused “food riots” in the past. In 2008 during the last major food crisis, riots broke out in Senegal as well as in parts of the Caribbean and Asia.

The IMF’s latest forecast revised the global economic growth in 2022 and 2023 — downgrading the European Union by 1.1 percentage points because of the conflict in Ukraine. “The war adds to the series of supply shocks that have struck the global economy in recent years,” Gourinchas said. “Like seismic waves, its effects will propagate far and wide, through commodity markets, trade, and financial linkages.”

Laborde told Yahoo News that one of the solutions is to “bring money into the system”; however, more than loans would be needed. “We cannot look at countries to get indebted just to feed themselves in the middle of the crisis, that some of them are not really responsible for,” he said.

Samantha Power, the administrator of the US Agency for International Development, told ABC News that food prices have risen 34% compared to last year and announced on Sunday that USAID asked Congress for help. “We really do need this financial support from the Congress to be able to meet emergency food needs, so we don’t see the cascading, deadly effects of Russia’s war extend into Africa and beyond,” she said.

Cousin said “if nothing is done” to urgently help those in need, “we could witness between 200 and 300 million acutely hungry people.”

What happened last week in Ukraine? Check out this explainer from Yahoo Immersive to find out.