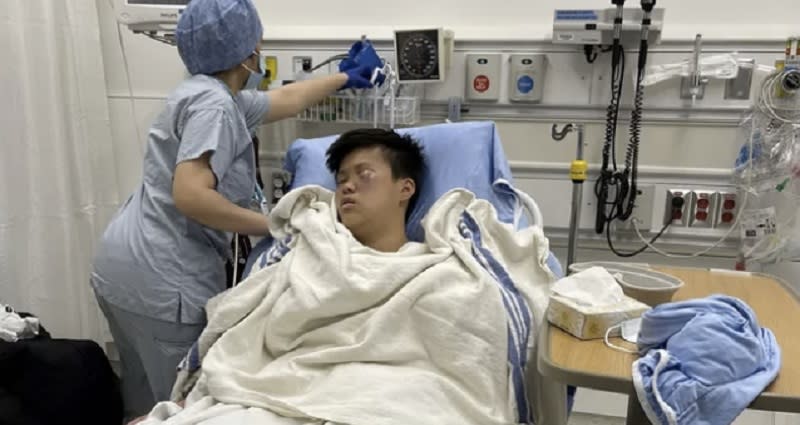 Local authorities in Canada are investigating an attack that left a 14-year-old student unconscious inside a high school in the city of Richmond.

Janice Xie, a Grade 9 student at Hugh Boyd Secondary School, said a 17-year-old Grade 11 student beat her up in a school corridor and left her with head injuries on Thursday.

The victim said she was going down the stairs during lunchtime when the older student ran after her. He then started punching her and insulting her.

“He called me a homophobic slur. He called me the ‘F’ slur and said all Asians are ugly and that he hates all Asians,” Xie was quoted as saying.

She told CTV that prior to the incident, her attacker had never interacted with her.

“He thought I was telling people he liked another girl when I didn’t,” she said. “And I don’t think I could’ve known anyways because I’ve never even spoke [sic] to him at all before that.”

Xie, who was hit to the hospital for treatment, suffered a concussion. She said the incident made her afraid of returning to school.

The victim’s mother, Jordana Sorensen, hit to the school after being told that Xie passed out twice after being kicked and punched.

Tim Sorensen, the victim’s father, later learned that their daughter was repeatedly hit in the face as she was lying on the ground until other students intervened. He said local authorities informed him that the alleged attacker would be formally charged with assault.

The incident is currently under investigation by the local Royal Canadian Mounted Police (RCMP) in Richmond.

According to Cpl. Ian Henderson, the male student involved, was apprehended at the scene and released to a legal guardian.

“Due to privacy concerns and the confines of the Youth Criminal Justice Act, Richmond RCMP cannot release further details or the names of those involved,” Henderson wrote in a statement.

Henderson said details about the suspect were not released to the media in accordance with the Youth Criminal Justice Actwhich states that information about a young offender must not be published.

Despite Xie’s fear of returning to school, she said she has been receiving support from friends and school counselors.

“Even though I was scared to go back, my friends made me feel better,” Xie shared. “Everyone was texting me… they all comforted me and said I can stay with you the whole day if you want and [they’ll] walk me to class and they’ll just stick by my side.”

David Sadler, director of communications for the Richmond School District, released a statement to CBC noting that the school board is aware of its responsibility to foster a “positive climate and a safe, healthy environment.”

Sadler also wrote that every member of their school’s community must act in an “ethical, lawful manner that demonstrates respect” for others.

A family friend, Susan Tran, has launched a campaign on GoFundMe to help fund Xie’s “trauma counseling, medical and physical therapy.” According to Tran, a portion of the raised amount will be used to help her and her family “get justice for this horrendous act.”

She Volunteered in Women’s Prisons at 14, Mentored The World’s Youngest Nobel Prize Laureate By 20