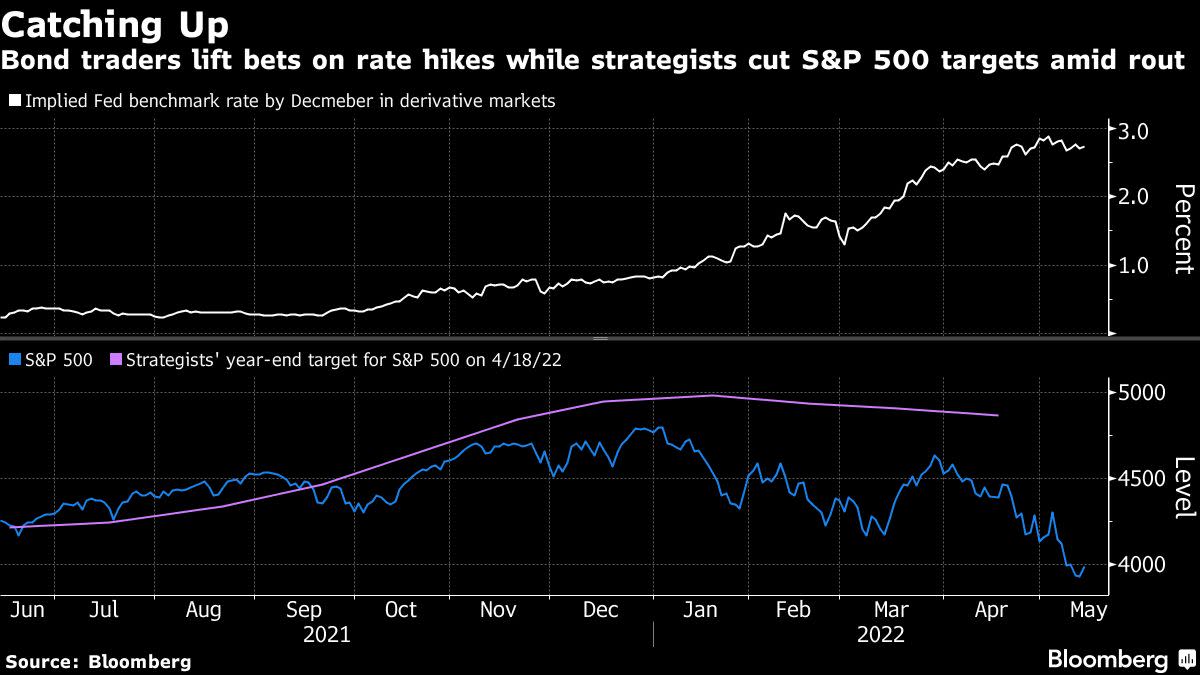 (Bloomberg) — Another stormy week has left investors groping when it comes to the direction of stocks and bonds. Expecting to be led out of the darkness by Wall Street’s best and brightest may be asking too much, given their performance so far this year.

As it usually happens in twisting markets, it is proving a brutal year to forecast for the securities industry. Back in January, stock strategists known for their enduring optimism expected the S&P 500 to add 5% in 2022. Down 2.4% for a sixth straight weekly decline, the index plunged as much as 19.5% on Thursday from its record.

Bond strategists weren’t any more prescient. Interest rate strategists and economists were calling for 10-year Treasury rates to rise to 2% by June. Yields took out that level in early February and have touched 3.2% this month.

Turns are hard to capture — that’s nothing new. This year, the collective inability to predict the persistence of inflation is the original sin behind wrong-way calls. But such failures are hardly confined to the strategist class. Predictions on inflation levels derived from bond-market trades were wildly off. They were forecasts from economists and the Federal Reserve itself.

“The path of inflation took most people by surprise,” said Chris Sullivan, chief investment officer at United Nations Federal Credit Union. “Not only has there been the quicker rate increases but the move to quantitative tightening was much faster than last time,” he added. “All of these things were introduced into markets that weren’t terribly prepared for them.”

Whipped up shortages first by pandemic-induced supplys and stimulus-fueled demand, prices in the economy are being jacked up even more by Vladimir Putin’s war in Ukraine and Covid lockdowns in China. The stickiness has prompted the Fed to toughen its hawkish stance repeatedly.

That’s flowed into markets, where stocks and bonds have fallen in tandem for the worst start for a year in decades, and obliterated calls by professional handicappers who are scrambling to recalibrate.

“Without the Fed creating something people feel comfortable with, it gets pretty ugly,” said Jim Vogel, an analyst at FHN Financial. “Some of the changes in the forecasts now are to just sort of keep up.”

To be sure, the business of forecasting the market is never easy. Very few people are able to predict a downturn. At the start of 2008, for instance, when the global financial crisis was about to bring the investment world to its knees, earnings estimates for the S&P 500 embedded 15% growth. And economists rarely see a recession coming.

One reason the woebegone forecasts might worry investors is that the Fed has cited Wall Street’s reactions when pushing back against accusations of having a credibility problem.

“In the fourth quarter of last year, as we started talking about tapering sooner and then raising rates this year, you saw financial markets reacting,” Powell said earlier this month. “That shows that the markets think that our forward guidance is credible.”

Still, if one steps back, it’s easy to see why equity strategists have been steadfast bulls over the years. Stocks tend to go up. In all but one year since 2008, the S&P 500 delivered positive returns, including dividends. But that was when inflation was virtually non-existent and the Fed kept monetary policy loose, before inflation spiked to a four-decade high.

“It all goes back to last year because in order to get any forecast right, in stocks, rates and other assets you needed to have your inflation forecast right. And nobody got that right,” said Tim Magnusson, chief investment officer at Garda Capital Partners, a hedge fund. “And they have been continually playing catch-up since.”

Back in January, the consensus held that the benchmark gauge would end the year at around 5,000. Fast forward to today, the index sits near 4,000. Along the way, almost half of the strategists tracked by Bloomberg have lowered their year-end projections.

At 4.837, their average target still points to an annual gain. It also implies an increase of 20% over roughly seven months, a feat that while not unachievable is something rarely seen. Only 11% of the time in history has the S&P 500 been able to pull off such a rally.

To Marko Papic, chief strategist at Clocktower Group, what set this equity rout apart from past drawdowns is that technology — by far the biggest weighting in the S&P 500 — has borne the brunt of the selling. And the lost leadership, he says, reflects a higher comprehension that inflation is here to stay and rates are heading.

“Investors have been anchoring to a dis-inflationary era,” he said. “They are starting to realize there’s a phase shift.”

The record of bond forecasters isn’t quite as bad, at least directionally. At the start of the year, the average forecast in a Bloomberg survey of strategists and economists put 10-year yields at 2.2% at year’s end. While that’s far below Friday’s reading of 2.9%, it’s above the 1.8% level that held back then.

There is good reason why rate strategists thought what they thought. Before the pandemic, almost every call for a major upside breakout in yields had proved misplaced, with the 10-year rate generally stuck in a 40-year downtrend.

Left behind by the spike in yields, Goldman Sachs Group Inc. to JPMorgan Chase & Co. are among firms that have been rapidly upgrading their numbers.

Meanwhile, bond traders are busy ratcheting up wagers on faster rate hikes. The benchmark Fed fund rate is expected to end this year at 2.73%, up from an implied level of about 1% in January, data from derivative markets show.

“Investors and strategists fell into recency bias and struggled to have the conviction to predict a major correction in ’22,” said Mike Bailey, director of research at FBB Capital Partners. “Very few would have predicted an inflation tsunami made stronger by Putin and zero-Covid China.”