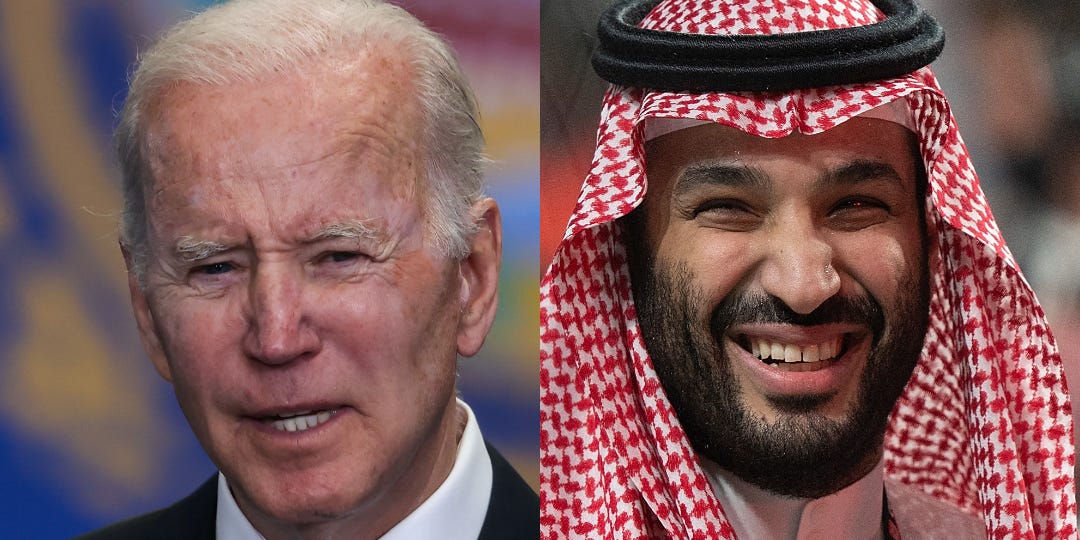 President Joe Biden entered the White House vowing to recalibrate US relations with Saudi Arabia after years of President Donald Trump shielding Riyadh and Crown Prince Mohammed bin Salman from punishment over the brutal murder of Washington Post columnist Jamal Khashoggi. Biden said Saudi Arabia would be made a “pariah” on the global stage and pledged to pursue a foreign policy centered on human rights — including by ending US support for the Saudi-led coalition in the Yemen conflict.

But with gas prices rising amid the war in Ukraine and midterms on the horizon, Biden is expected to visit Saudi Arabia later this month to discuss the escalating oil crisis. With the US and its European allies embargoing Russian oil over the war, the Biden administration is looking to Saudi Arabia to help blunt the impact of the sanctions on global markets.

The expected visit, which has been reported on by The New York Times and The Washington Post but has not been confirmed by the White House, is a sign that Biden has been forced into a corner and feels he has to prioritize business over ethics, foreign policy experts told Insider. By visiting the oil-rich country, the experts said Biden would effectively be declaring that maintaining friendly relations with Prince Mohammed — the de facto ruler of the kingdom who is often referred to as MBS — is more important than punishing him for Khashoggi’s murder and other human rights abuses.

“A presidential trip to Saudi Arabia right now is going to be confirmation, validation not just that it’s business as usual but that MBS got away with murder,” Aaron David Miller, a former US diplomat who advised multiple secretaries of state on the Middle East , told Insider.

Last year, the Biden administration released a declassified intelligence report that directly implicated MBS in Khashoggi’s murder. Sanctions were slapped on a number of Saudis in concert with the release of the report, but MBS was not among them.

Biden has framed the war in Ukraine as part of a global battle between democracy and autocracy. Along these lines, Miller said he’d ask the president, as he fervently defends democracy in Ukraine, why is it a “good idea to meet with a man who’s among the most repressive authoritarian leaders” in the region.

“I don’t think there’s any way to change that optic,” Miller said, adding that Biden is sending a “pretty powerful signal that it’s OK now to do business with MBS.”

But Biden also seems to “genuinely become about this,” Miller said, noting his desire to prioritize upholding democracy and human rights in his foreign policy. “Biden was being very aspirational,” Miller said.

Trita Parsi, executive vice president of the Quincy Institute for Responsible Statecraft, told Insider that it’s fair to say MBS is “getting away with murder.” But he added it’s not just the murder of Khashoggi, but the “murder of plenty of Yemeni children.” MBS is the architect of the Yemen war, which has seen over 10,200 children killed or injured since Saudi Arabia first intervened in 2015, according to the UN.

Dalia Dassa Kaye, a senior fellow at UCLA Burkle Center on International Relations, told Insider that visiting Saudi Arabia would be a “serious mistake, and not just because of human rights concerns.”

“It’s just not clear what the return will be on any conceivable interest, whether oil, normalization with Israel, or great power competition with China and Russia. And what’s unfortunate is there are alternatives to advancing these issues and maintaining a working relationship with Saudi Arabia without a presidential visit to Riyadh. This is a bad deal for Biden — he’s risking his reputation and compromising on principles for modest returns,” Kaye said.

But Hussein Ibish, a senior resident scholar at the Arab Gulf States Institute in Washington, DC, told Insider that a presidential visit to Saudi Arabia would not be particularly “unexpected” under the present circumstances.

The bottom line is that Biden is not doing anything that any responsible US president wouldn’t have also done, Ibish said. “Statecraft often involves making difficult choices.”

Ibish also underscored that it’s not only the economic consequences of the Ukraine war that the administration has to take into consideration. The ongoing, indirect talks in Vienna aimed at reviving the 2015 nuclear deal with Iran are stalemated, and if the pact can’t be revived, the US has to consider other ways “to help isolate, contain, and deter an Iranian regime that appears determined to get a nuclear weapon,” Ibish said.

“The US-Saudi relationship is built on some pretty solid foundations of shared interests,” Ibish said. “These are two status quo powers, and Saudi Arabia needs the United States to guarantee its fundamental security, whereas the United States needs a partner in the Gulf region to help secure the energy resources of our major trading partners and the global economy.”

In remarks at an event marking the 100th anniversary of Foreign Affairs magazine, Secretary of State Antony Blinken defended the Biden administration’s approach to relations with Riyadh. He said the administration had largely succeeded in both recalibrating and “preserving” ties with the kingdom, describing Saudi Arabia as a “critical partner” in confronting extremism in the region and in “dealing with the challenges posed by Iran.”

Blinken added that energy was a “critical piece to this, too,” emphasizing that the administration wants “to make sure that there is sufficient supplies of energy on world markets at a time that this is being increasingly challenged.”

But Parsi said that the Biden administration could’ve avoided this situation if the president had returned to the Iran nuclear deal via an executive order during his first days in office. Parsi said that Saudi Arabia’s influence over global oil prices has been “enhanced by the fact that the Iranian oil has been off the market.” After former President Donald Trump withdrew from the Iran nuclear deal in May 2018, he reinstated sanctions on Iranian oil. Restoring the deal could see the US lift such sanctions.

“It is a failure, but it is a failure by choice,” Parsi said of Biden’s approach to Saudi Arabia, adding, “It is not a failure because his efforts were due to fail. He gave up and that’s why it failed. And he made bad decisions along the way.”

Biden “could have stood firm,” Parsi said. “Instead, a year and a half into his presidency, he’s essentially caving to MBS.”

The president on Friday said he has “no direct plans” to visit Saudi Arabia at the moment, but he did not rule it out.

“I have been engaged in trying to work with how we can bring more stability and peace in the Middle East. And there is a possibility that I would be going to meet with both the Israelis and the Arabs. Some Arab countries at the time, including, I expect would be Saudi Arabia to be included in that if I did go,” Biden told reporters at the White House.